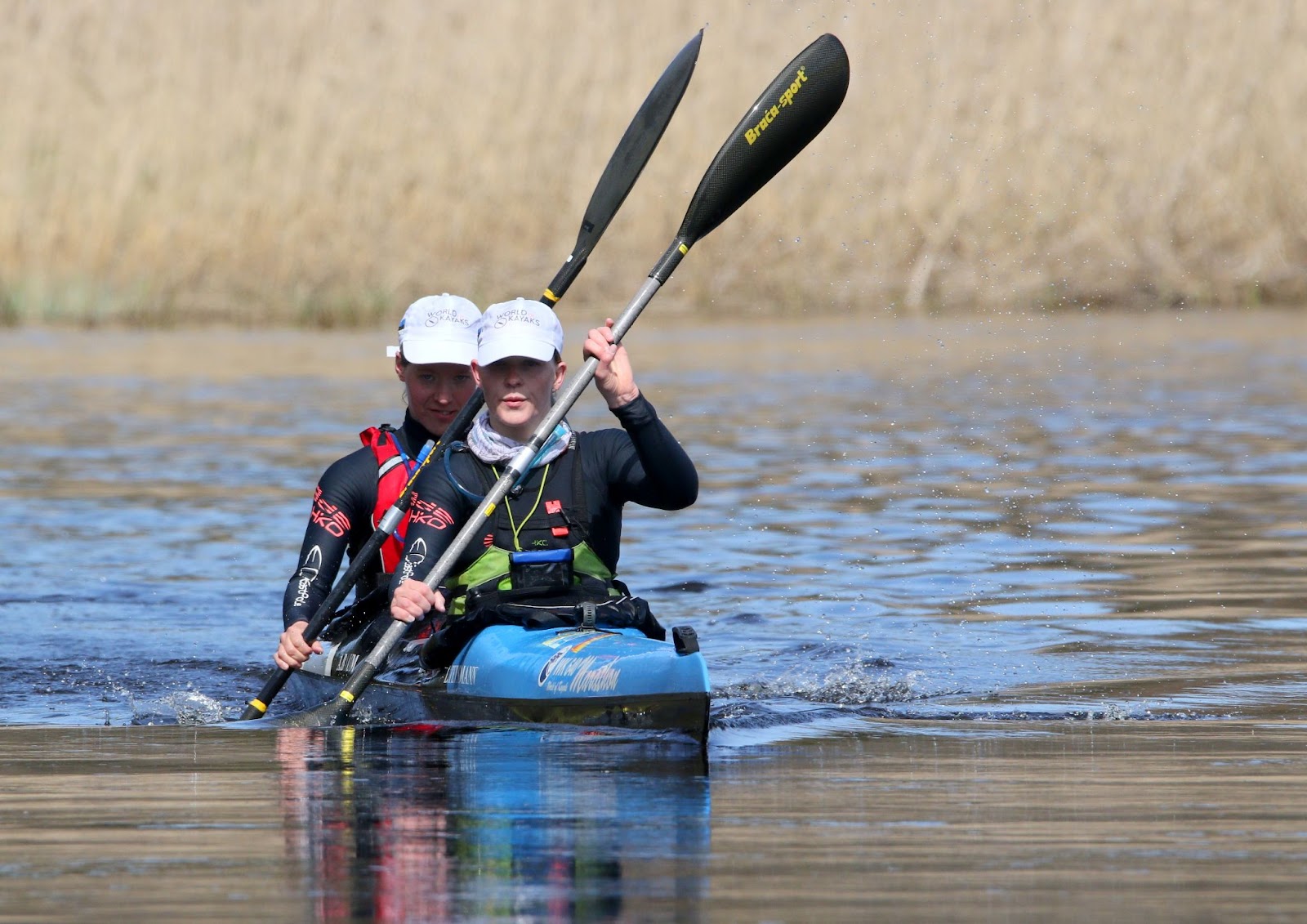 Two weeks ago, Anette and I started on the Türi-Tori downriver race (78 km). The whole arrangement that Märt Maipuu did with his team was great. Organizing a competition in these difficult times is definitely a big challenge. We as participants were free to choose the start date and time between 08.05-16.05.

It was sincerely honorable for us how Märt Maipuu, the chief organizer of the Türi-Tori downriver race, and his team welcomed us. The message that we are making a great honor with our participation was something that warmed our hearts and at the same time caused a bit of awe, because we do not consider ourselves to be the top-top marathon paddlers in Estonia. Rather, we think we are still green :)
The main competition date was Saturday (08.05), but our start on that day was not possible. At the end it was very good that we could choose another time for our race. On Saturday, Anette had the first paddling cup competition in Tartu (2500 m, result: K1WOM 3rd place), as well as receiving the second injection of Covid vaccine in the evening. Obviously, until Sunday morning (09.05, when it was also Mother's Day), I wasn't 100% sure if we were still starting the race the same day. It was important for me how Anette feels after receiving the vaccine and whether her body allows to compete. Her will and nimble state of readiness (also taking into account the fact that she could only sleep for three hours because her sleep disappeared) led to the decision - we are going to paddle today. (I was subconsciously prepared that if the feeling goes out of hand, we would interrupt the race).

THOUGHTS BEFORE THE RACE: 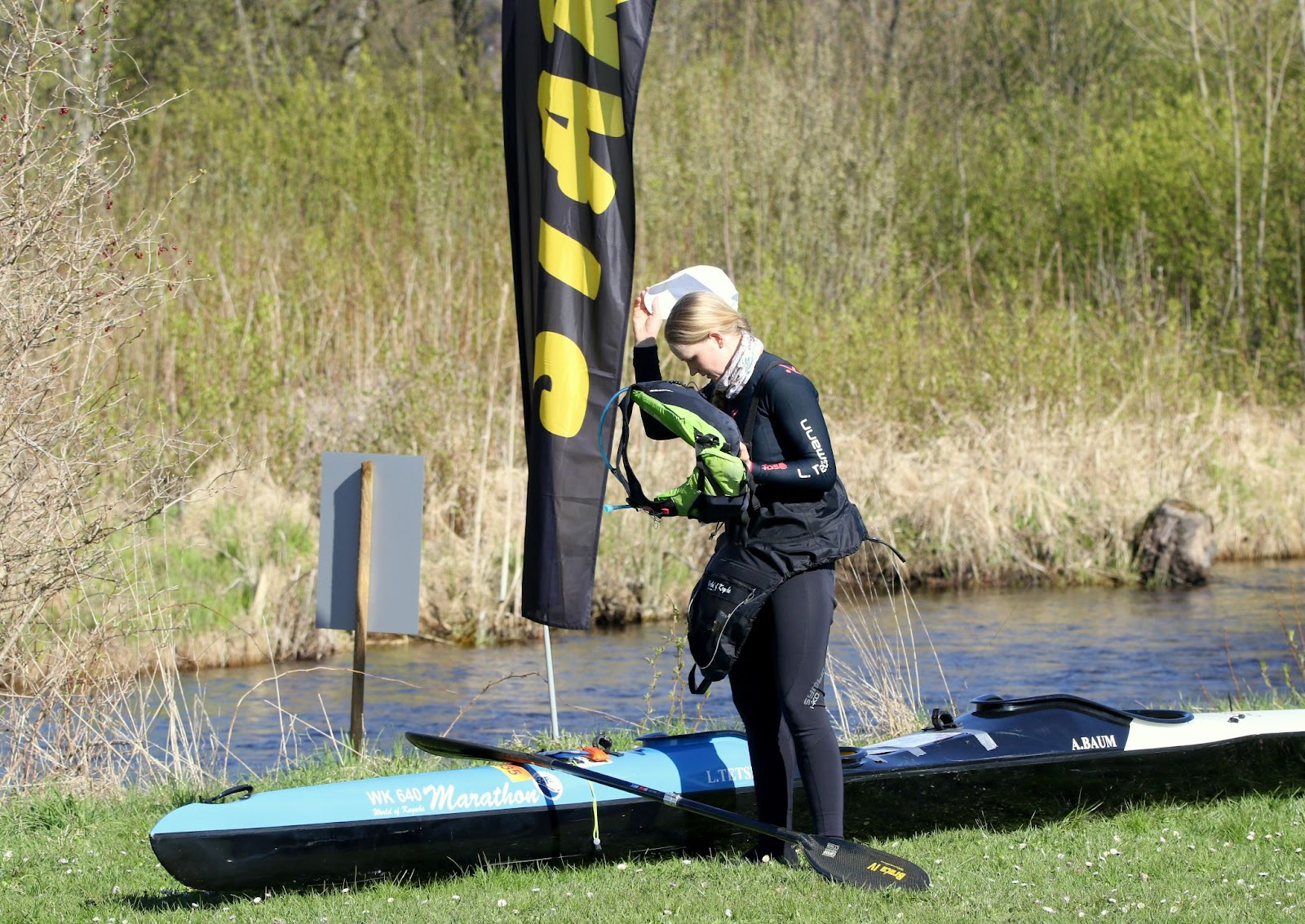 At that moment, when there was still a probability that the Võhandu marathon 100 km would take place on 22.05, the idea was to paddle the Türi-Tori downriver race descently with the goal of training, which means that there was no maximum performance planned. When it turned out that the Võhandu Marathon did not receive a special permission to organize the competition and cannot take place on 22.05, the weight bowl was tilted towards a stronger run, i.e to test what work / training allows us to do, what our form is

We knew the results of Saturday. Fortunately, the water conditions were good and so was on Sunday. Of course, we were asked what the plan was, knowing that the bottom of the track had been paddled 6:55:43 by Kaju and Kermon (the overall winners of the Võhandu marathon in 2020). Well…. the main plan was to reach the finish in one piece. Paddle our race and if we succeed, try to fit in 7 hours and lose as little as possible for men. That was the plan.

Although there were no other paddlers at the time we started, it was nice to experience a sense of competition. The weather was beautiful, the sun was shining, there was also a wind that was pretty cool. 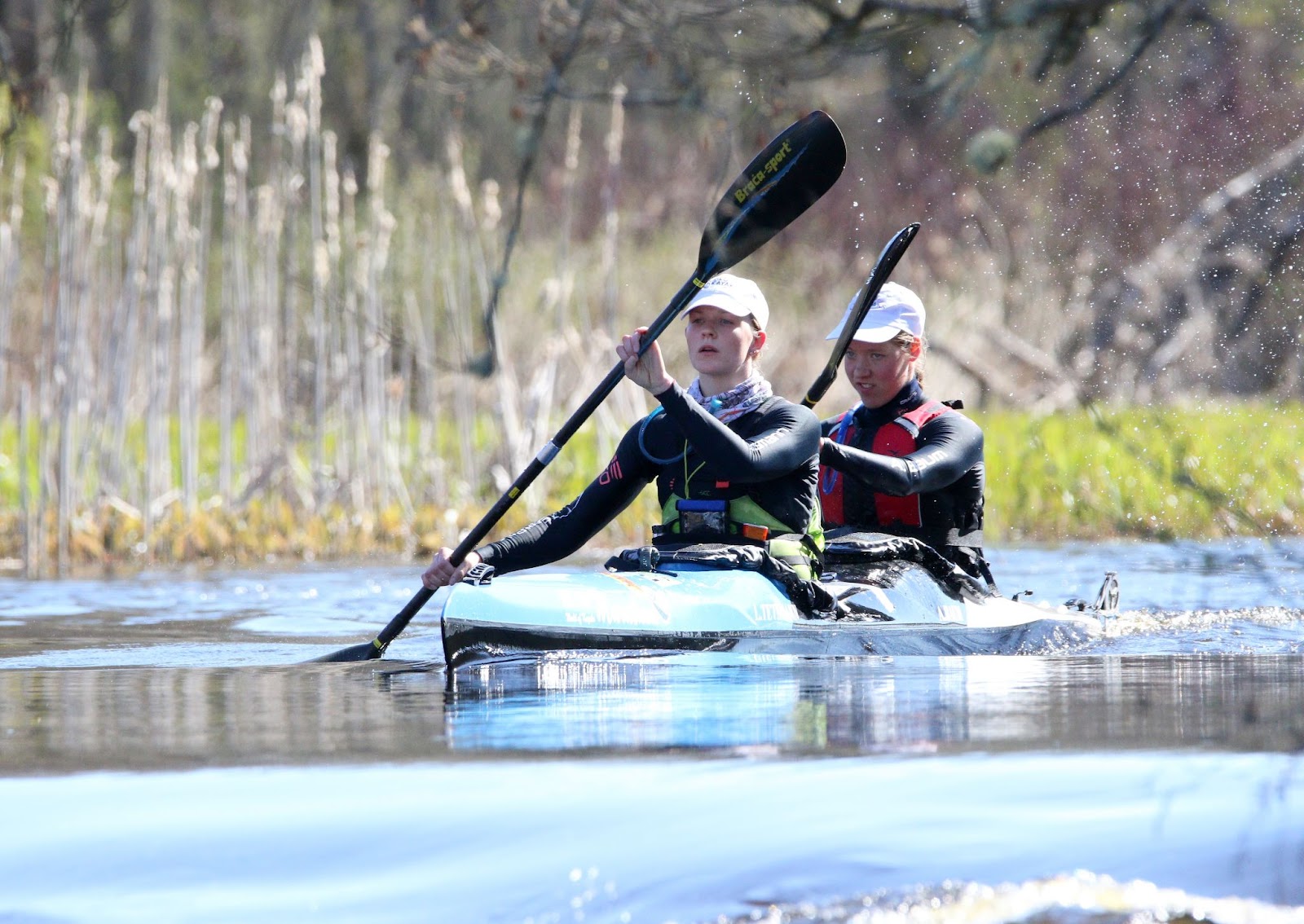 The upper part of the river route (from Veskisilla to Kurgja: 31 km) was definitely extra interesting for me, because I had not paddled there before and the mill dams that came were also not familiar. But the truth is that there are challenges for the whole race. In my opinion, this is a really interesting and technical river marathon (especially when there is high water). I wasn't afraid of the race too much, because I know that with Anette we can handle situations, we will discuss the questionable places and take the direction together. We had also done a couple of trainings on the Pärnu River and once on the route Suurejõe-Paikuse, with a high water level - there was some action;)) 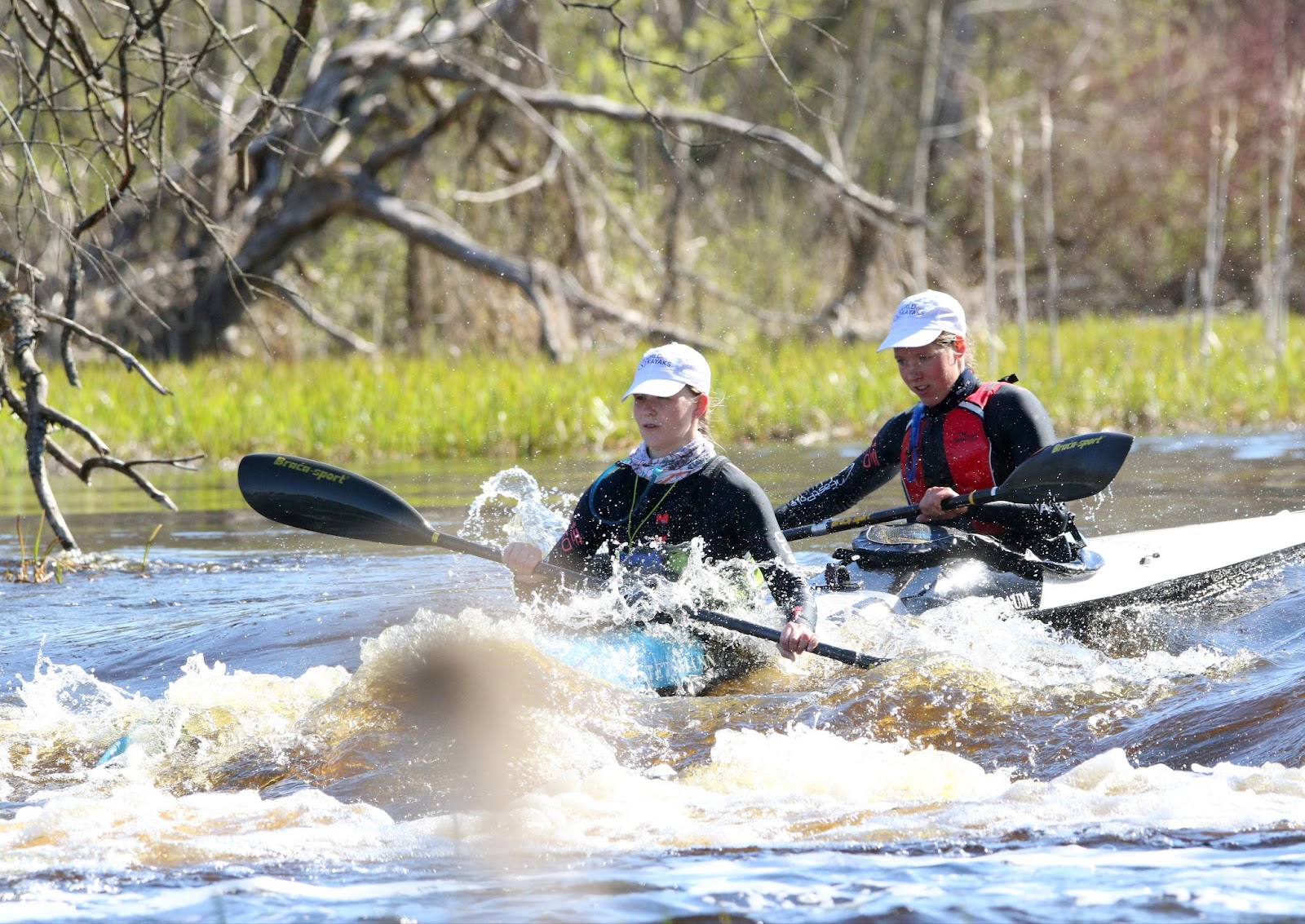 The timing system was practical, but also disturbing for us as the competitors, because we had to stop and register the time ourselves (using either a QR code or by calling, we chose to call).
We acted in an organized way in places of time-check, eating and reading the river. A brief discussion took place as we approached Kurgja. We seemed to be paddling with Kaju and Kermon in more or less the same time window. When we actually reached Kurgja, it was beyond expectations and it seemed unrealistic that we would be ahead of them in about 10 minutes. We made a quick “bladder break” and moved on, without wasting time to get to know the exact time difference. I still remember myself saying, "It's not so important to know the exact time difference, we paddle our own race." We didn't allow ourselves too much excitement, because we knew that there are still many possibilities for so-called mistakes (in terms of reading the water flow), losing the feeling and destroying equipment. 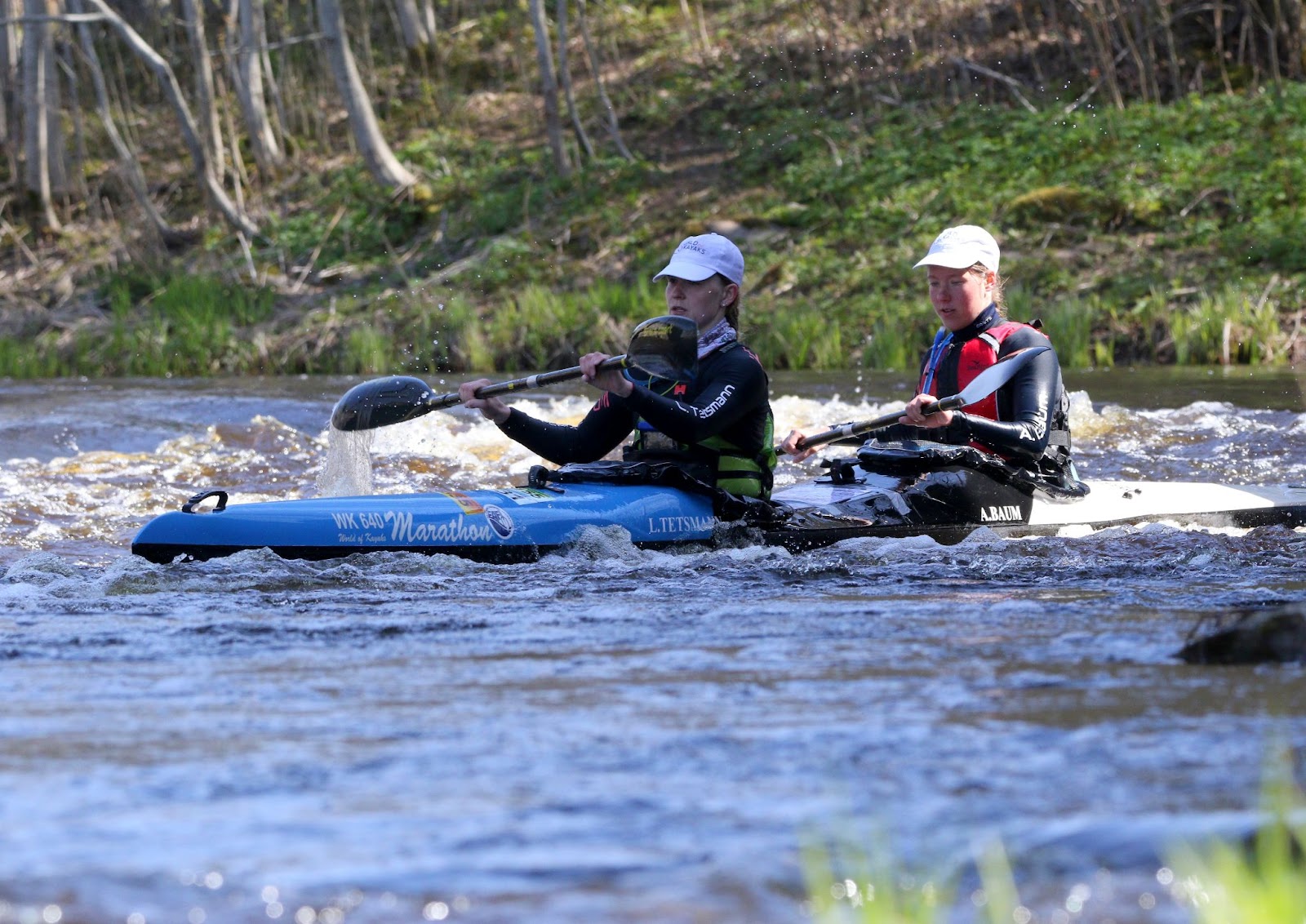 Arriving on Suurejõe, this time my soul was calmer than on April 11th, when Anette and I went for training. I knew which trajectory to take. Although it didn't fall out perfectly, the situation was under control. The race continued with a stronger wind, more precisely with a headwind. When we had paddled almost 50 km, we made one stop, because our hands started to freeze. We made a stop by the shore to attach the “gloves” to the paddle. Yes, a stop because we knew we could deliver faster that way and avoid suspicious moments where the paddle could get stuck in the wrong position. 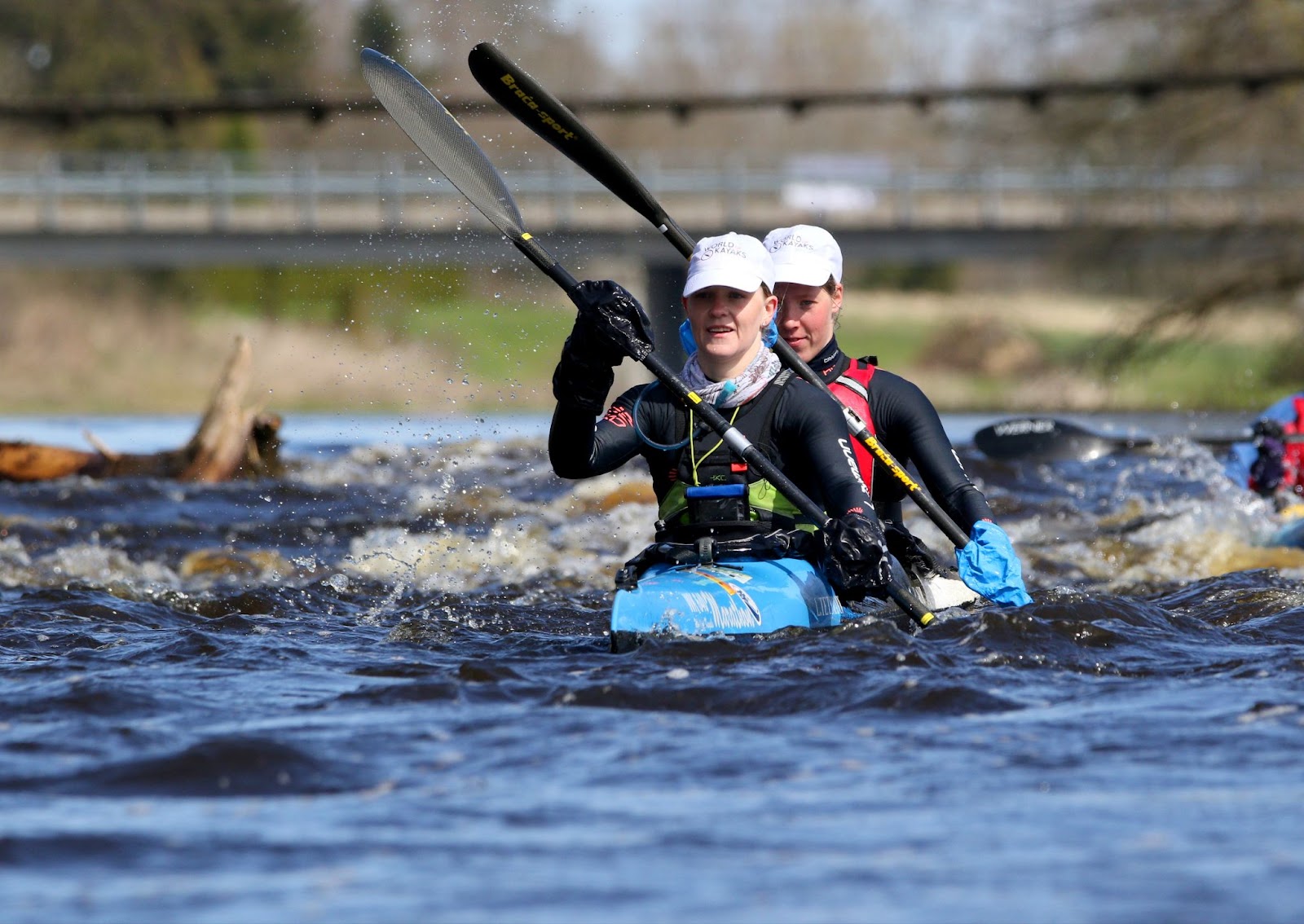 We still control our eating, i.e. very systematically from the very beginning we consumed something every full hour (banana, cheese / sausage sandwich, energy gel, snickers, corny). In addition, Saltysticks salt capsules and liquid magnesium were taken.
Shortly after Kure KP (paddled almost 60 km) we made one more stop, because Anette's important observation, how the feeling of coolness started to rob energy, needed a solution. We had jackets and a change of clothes with us. Anette put on a jacket (it was wise to get out of the kayak for that action), I didn't need to add the jacket, I sat in the kayak and ate corny, because half an hour ago I didn't want anything (I felt full). I also took one extra magnesium because the elbow of my right hand was starting to show up (the injury I am currently struggling with) and there was a feeling that something had already been done. 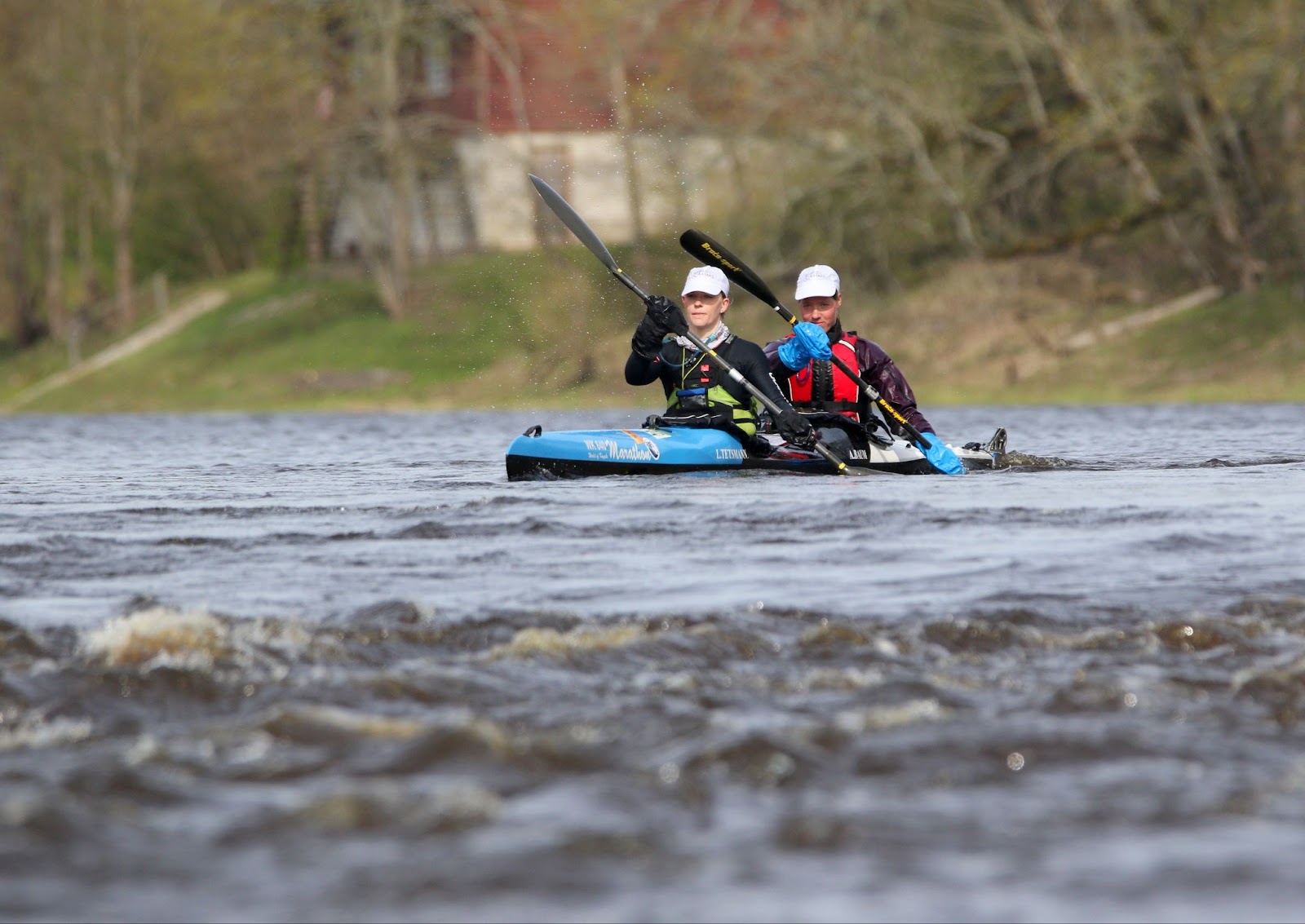 The stops diminished the expectation that we could outperform the men, but we knew we could paddle at our own pace and we wouldn't lose much to them.
We checked up the speed and when the speed dropped below 11 km / h we reached the idea that we can't beat the men at the finish. However, the knowledge and information that there is a good flow of water on the river ahead and we will hopefully speed up, gave us confidence that we will probably fit in 7 hours. Of course, it was necessary to continue to paddle wisely and carefully.
After passing the Jõesuu waterfall and increasing the speed (sometimes 15 km / h) and calculating the distance and time, we got the idea that we can really rise to the position of leaders ourselves. But we still didn't want to anticipate the events, the wind was pretty strong and the last rapids were ahead. We kept the rhythm, the end wasn't far away. 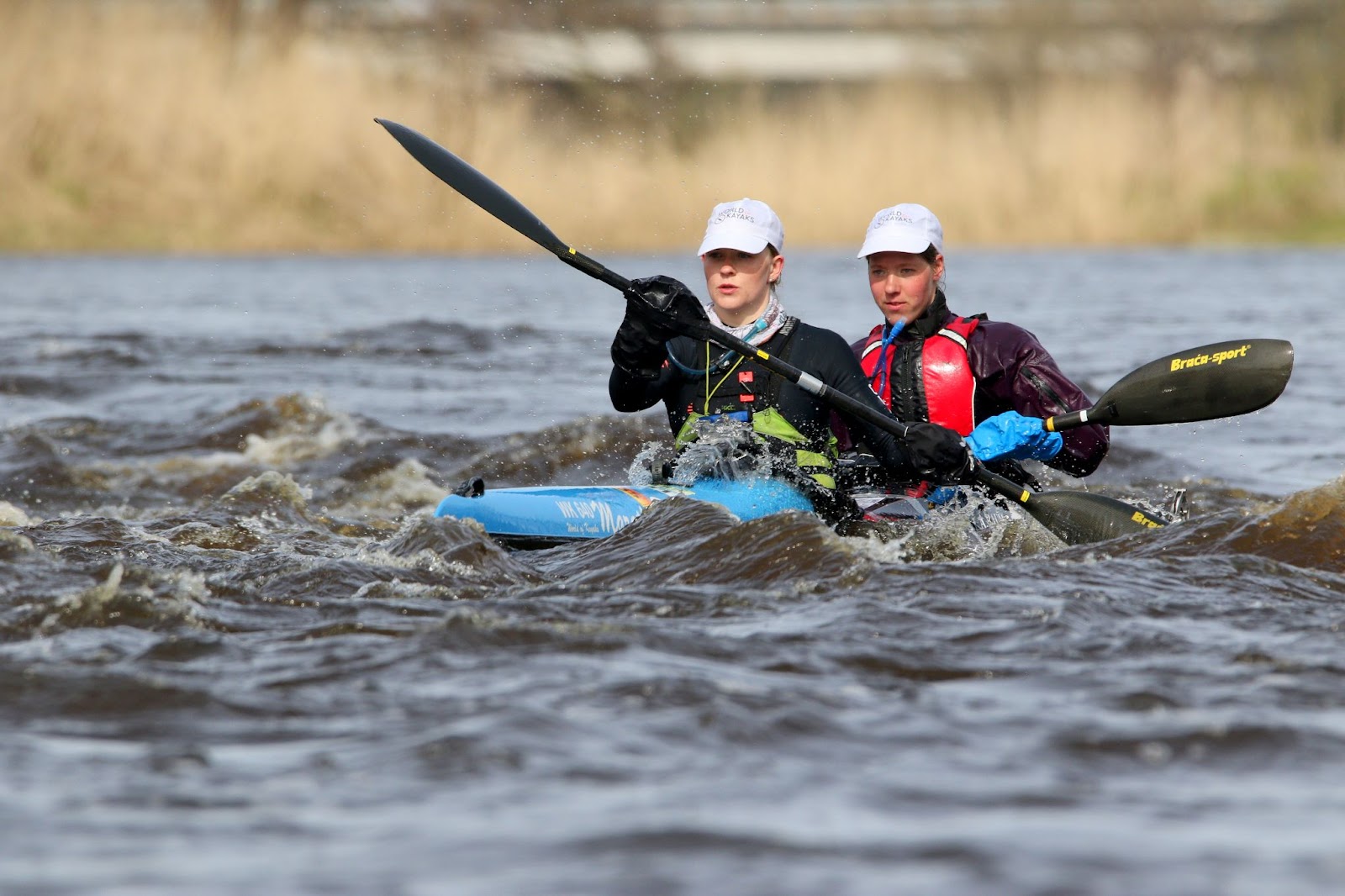 For me, the important recognition was “the feeling that I can afford a strong effort from the beginning, knowing that I will last until the end of the race” was good. Here the key lies in my coach Eiko and the trainings we do.
In conclusion: we became the general leaders of the competition (78 km) with a time of 6:45:13. Obviously, this result was beyond our expectations. The feeling that our condition and paddling is good and matching, even if we don't manage to do a lot of training together, was a joy.
The fact that we were 10 minutes ahead of Kaju and Kermon raised questions about whether they had encountered technical errors. We later got to know that it was more a matter of choices.
We didn't rush to be victorious, we were leaders. There was still a week of time to beat our time by anyone. It was also possible to go and race for a second time. We immediately ruled it out for ourselves. The idea that the water level was going to start to fall from the new week did not favor faster paddling. We were pleased with our effort and performance. The idea that we can paddle with such strong victories, and not only, also win, was fierce.
The fact that we won the Türi-Tori downriver race 78 km overall became clear on the evening of 16.05. It is also a confirmation that we are working in the right direction for ourselves :)

Did we break the equipment? We say that no major damage occurred, but three times we did get the stone touched (twice in the first 30 km and another in Vihtra Mill). More crusts came under the bottom and the main cover was also damaged a bit. Fortunately, we didn't get a hole in the bow or bottom of the boat.
Did we believe before the race that we could take the overall win? No. Seeing that the general winners of the Võhandu marathon are racing, we did not expect it at all. But, as has been said, we went for a race with the aim of reaching the finish line and losing as little as possible to the men.
What are the near future plans? I, Linda, aim the Võhandu marathon, which will probably take place on 12.06. If Võhandu will take place, then yes, this year I'm back in the K1WOM class. Anette is aiming for the European Championships in the U23 age group, which will take place between 24-27th of June in Poland (Poznan). Together with Anette, we will definitely compete more this year. Time will tell when and where. 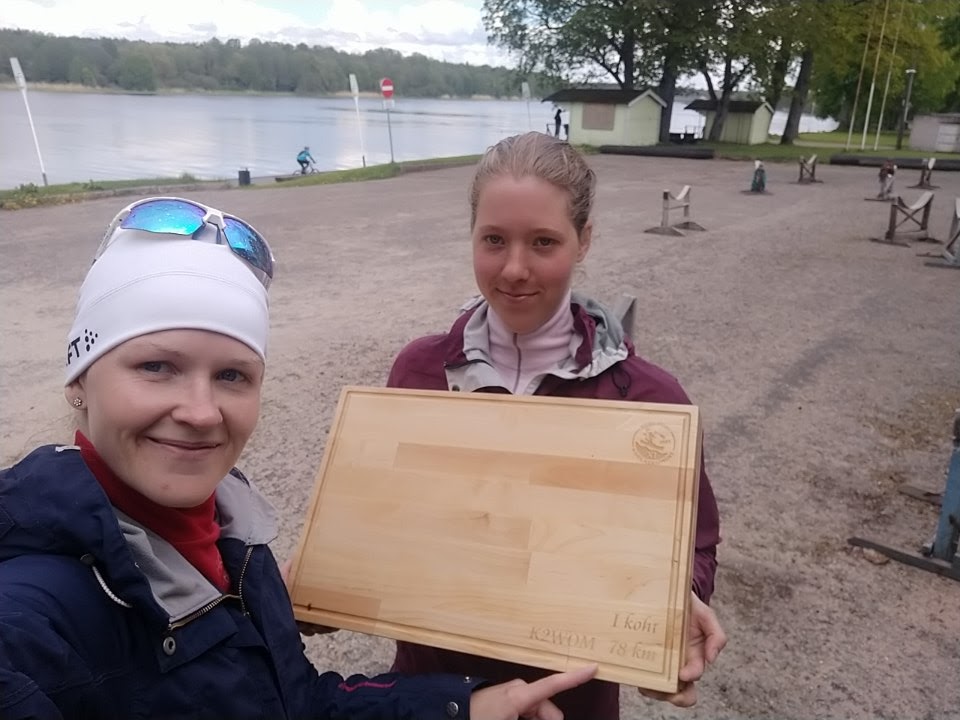 22.05 after 3 hours of training on the Pärnu and Sauga rivers we opened our prize package.

What a beautiful and practical award we received!

Popular posts from this blog 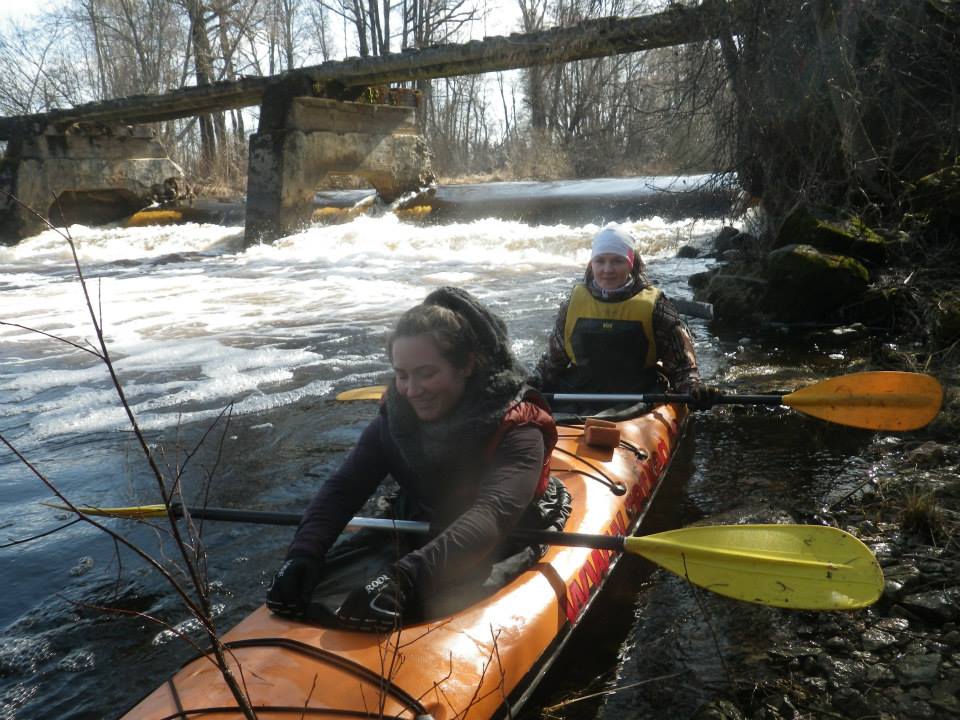 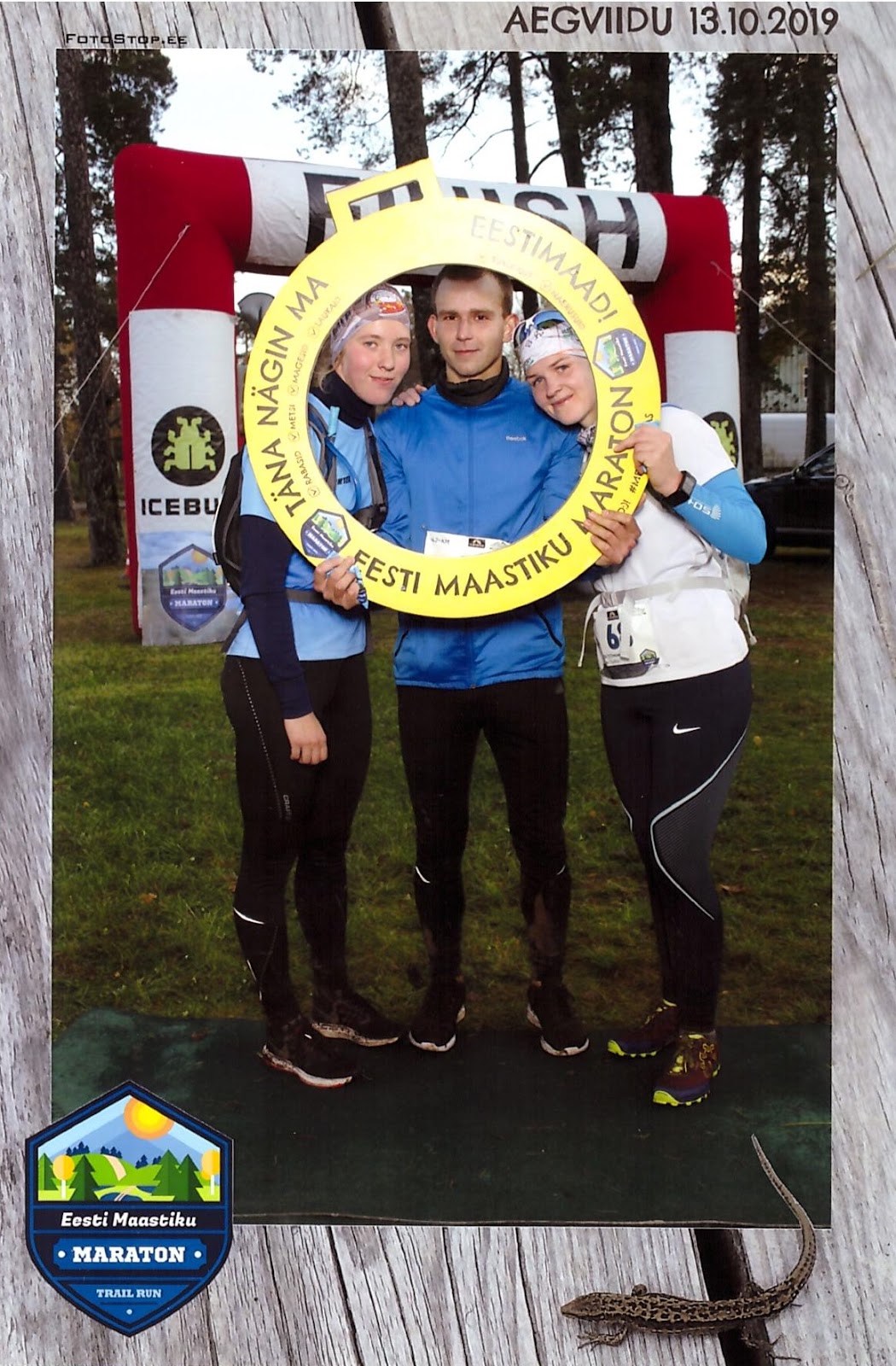 Hi to all of you! As promised at the end of the last blog post, we will share the steps to Yukon River Quest that we have done till the beginning of 2020. Here, let´s continue with October 2019 At that time we were pretty sure we are going to be presented on Yukon River Quest 2020 but beforehand we needed to deal with one real key action - registration. I am coming to this story separately. But at this period we also knew that preparation counts and long-distance challenges will be supportive of our performance on Yukon. From left: Anette, Robert, Linda (42+ km finish) So, we decided to take part in our very first (running) marathon “Estonian Wilderness Marathon 42+k” (check more about it here: ESTONIAN WILDERNESS MARATHON 42+K/25K ). We did/do not consider ourselves as runners. To think back on our sports backgrounds, both of us (me and Anette) have done mostly sitting sports from childhood. But we liked the idea of moving on foot while being in nature and on tr
Read more

lindanettechallenges
We are Linda and Anette (lindanette)! Kayaking enthusiasts, who like to paddle long distances on the rivers and we like competitive challenges.